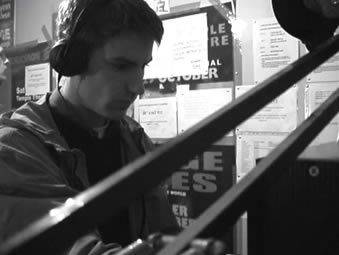 Francis is responsible for producing, composing, editing, CD-making, the website and DJing (alongside Banny). He started out producing at the age of 9 on an Amiga 500 and a copy of Octamed v3 and only began DJing in 1998.

Back when he started producing, the ‘Rave’ scene was just kicking off and people like the Prodigy, Acen, Citadel Of Kaos and the various Hardcore Breakbeat DJ’s like Slipmatt, Sy, Seduction, Dougal & Vibes had a strong influence on him. He was interested in Oldskool Hardcore/Breakbeat music but that style died a sudden death in ’95 when Hardcore turned to ‘Happy Hardcore’ which was like kiddies fairground music! The older stuff was actually bangin’ though.

Anyway, from there he went on to listen to Trance (when it was good). That didn’t last for more than about 2 years when everything in the Trance style had been tried and tested and there was nothing new or exciting about it anymore.
For the last three years he has been producing and DJing Hard House/Hard Trance and the odd bit of Oldskool Hardcore. Hard House is doing for clubs and warehouses now what Hardcore and Trance used to do. However, Hard House still has about a year left in it before it goes full circle back into Hardcore again. Let’s face it, it’s getting faster again and all of a sudden all the Hard House producers out there are sampling off old Hardcore tracks! Bleedin’ copy cats! Where do you think all those breakbeats are coming from? Hardcore… Sure, even look at the history of some of the Hard House producers around now. Vinylgroover, DJ Brisk, DJ Ham and DJ Sy. These are all Old Hardcore producers 🙂 Bring back the Oldskool!
XS DJ’s on a Sunday night from 9-12pm on Hot 99.4 FM (Dublin) promoting the latest & best in Hard House, Hard Trance and (now and again) the Oldest in Oldskool Hardcore.